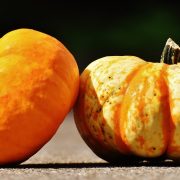 Thanksgiving is a very important American festivity and it is celebrated on the last Thursday of November.

However, schools and many shops and offices are closed for four days : Thursday, Friday, Saturday and Sunday.
Thanksgiving is a special day for families to be together and to thank God for all they have. Americans travel great distances to be with their families on this occasion.

Why is Thanksgiving such an important day ?
The tradition started with the pilgrims, the founders of America. The pilgrims left Great Britain in 1620 because of religious persecution. They wanted to start a new life in America and practise their religion in freedom.
One hundred men, women and children left Britain on a small ship called the Mayflower. Their sea voyage was very difficult. Many Pilgrims died during the voyage.
They arrived on the north-east coast of North America in December 1620 and found Pl 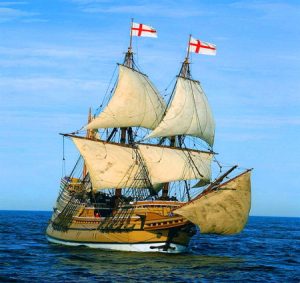 ymouth. The area was a wilderness. It was winter and they had no homes and little food. They immediately built small homes, but it was too late to cultivate crops. The winter was very cold and harsh. Almost half of the Pilgrims died because their living conditions were very bad.
The friendly Wampanoag Indians helped them during the long winter. In the spring the Pilgrims met an Indian called Squanto. He explained how to grow corn, hunt and live in the wilderness. Soon the Pilgrims and the Indians became good friends. The Pilgrims worked hard and cultivated crops. The summer harvest was excellent. By November 1621 everyone had food and a home. There was hope for the future.
Governor William Bradford, the Pilgrim leader, decided to celebrate with a dinner for the Pilgrims and the Indians. He wanted to give thanks to God.
Today the traditional Thanksgiving meal is similar to the first. People eat roast turkey, sweet potatoes, corn, cranberry sauce and pumpkin pie. Most families start the meal with a prayer.
The long Thanksgiving week-end is the perfect time to start Christmas shopping ! Big stores are open on Friday, Saturday and Sunday for the Christmas shoppers.

wilderness : land that is not cultivate
crops : food which are cultivated
harsh : hostile
harvest : récolte

Do you want to make an original dessert for Thanksgiving ?

Try the Pilgrim’s Apple Crumble, a recipe from long ago ! It’ s easy to make and delicious to eat.

To make the fruit mixture you need :

Make the crumble first. Put the flour into a b 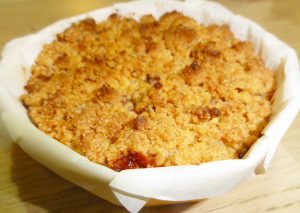 owl. Add the butter and mix with your hands. When the mixture is crumbly, add the sugar and mix well. Then make the fruit filling. Put the sliced apples, sugar and cinnamon stick into a big saucepan. Add the water and cook until the apples are soft.

When the fruit is ready put into a non-stick pie dish and cover the fruit with the crumble. Put the pie dish into the oven (200°C) and bake the crumble for 30-40 minutes. Remember, the top must be light brown. Happy Thanksgiving !